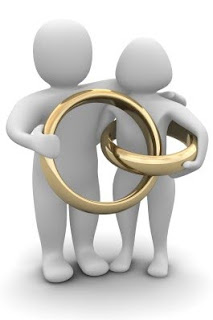 Husband talk has always been one of those tricky topics for me on this blog.  The topic is not completely left untouched........how can such an important part of my life be left out?  But, let's just say, it's one area that I try to tread lightly.  Except for maybe here and here and oops, here.....I've been a good little blogging wife!  Still, the spouse topic is one of the most important areas for the empty nest parent.  So, I pull out the carton of eggs and tiptoe through this delicate topic.....for my readers, of course.

I can safely say that 100% of my friends and acquaintances who are in the empty nest phase of their life, would say that life with the spouse has changed; 85% would say that these changes are dramatic. The types of changes range from reigniting the most passionate feelings for one another to convictions of murder and all places in between.  And, there doesn't seem to be any rhyme or reason why some couples change one way or another! It is safe to say that most of us did not read up "how to best cope with the changes that WILL occur once the children leave the nest".  I know I was too busy being Mom and coping with the feelings of loss and excitement as my babies started flying the coop. The husband would have to wait....

Which brings me to a thought and a story set back in 1990.  I was married to my first husband (a topic I rarely touch on this blog!) and had just had my 3rd and final child.  I was in the throws of breastfeeding, potty-training and the first year of t-ball with the kids.  I was doing the best I could.....I think you could call it 'managing' the chaos!  It was wonderful and awful at the same time.  If you had interviewed me at the time, I would have said I was happy.  The days and many of the nights were filled with activity, only the activity with my husband was limited.  Looking back, I now know that my old stand of "the husband would have to wait" was detrimental to our relationship.  Who knows if devoting quality time for the spouse would have kept us as a married unit, but let's just say for the fun of it....it wouldn't have hurt the relationship!  All parties in the family should be given equal attention and love.  Easier said than done, though, at least for me it WAS and IS..........

So, why is it that history keeps repeating itself and we humans have a difficult learning from our past mistakes?  Do we really have to keep trying out Keynesian economic practices before we understand they rarely work?!!  I digress..... Okay, so I know that not placing the significant amount of time and effort towards my spousal relationship during the empty nest years could result in negative changes in my relationship, which may or not be a good thing in the end.  That's step one....learning from history....my history.  I acknowledge this to be true but DOING the right thing here, isn't coming naturally.  Why?

There is the other side of the coin.....what if drastic changes with your partner during this empty nest period result in an even better quality of life (maybe even for both of you)?  Well, that topic deserves a whole post to itself!  For now,  I am sticking with improving on my life as it stands.  Good luck to all of you in the same boat!

Seeing Things Clearer After the Haboob

Image via WikipediaThanks to all my East Coast relatives and friends who called to see if we had survived the haboob.  Yes, although there is still a thick layer of dried mud splattered on 90% of the windows of my home.  And, I do not feel like spending the several hours, in 105 degree heat, to make them spotless again.  I prefer to think of this as just a part of my energy efficiency program.....keeping the hot rays from entering the home....and lowering my electric bills. That's my story and I'm sticking to it!

I love the word 'haboob' and will admit that until this week, I had never heard it used.  I don't love it like a 12-year old boy might love the word....ha-BOOB!  But it sounds very middle eastern where their people experience haboobs all the time.  The picture above comes from Iraq from one of our military camps. I love when words sound like the object or the action they represent.  Like lingerie....snot......reprimand.......furious.  Other words are confusing......like linger.  Does that word conjure up relaxing thoughts....."lingering by the pool" or do you attach negative actions like, "the smell of week-old garbage lingered in the kitchen"?  I prefer words that sound like they mean.

And, is my brain covered in dust or did everyone find the 'first Presidential Twitter event' to be as ridiculous and lame, as I did?!  Seriously!  So, the public asked questions using Twitter as their format and then Obama answered them back talking with as many words as he wanted?  How stupid.  They have been doing this on CNN for, what...a decade?

Before the event, I was thinking, how clever of the President to showcase his amazing abilities to not only address the country's most important issues, but also fit his answers perfectly using 140 characters.  To be able to think on the spot and to know the subject so well that he could try to make each answer in exactly 140 characters.  I have seen people in various fields, (music, theology, guests on NPR) who challenge themselves to have perfect 140 character answers, and it is impressive.  No, the President who collected millions of dollars fundraising and convincing voters to vote for him by his creative use of the social media arena, doesn't even know how to tweet.  He's tweeted twice before.  It's all just a facade.........some young, clever people around him made him seem tech-savvy, but in reality, even John McCain understands social media better! President Obama, here's some advise I used to tell with my kids when they were young:

Never try to act like someone you are not; it will only catch up with you and make you look very foolish. Be proud of who you really are!
(yes.....that IS exactly 140 characters!)

Finally, thanks to the business advisory group I belong to, called Redwood Alliance; I now can see clearly what direction and actions I need to take to strengthen the stability and profitability of my marketing consultant business.   This group is made up of business men and women far more wise and successful than me and every meeting I come out with strategies and suggestions for improving my business. I am thankful to have joined this group!

Watch the latest videos on YouTube.com